Loujain Al-Hathloul is a UBC alumna and women’s rights activist, who spearheaded the charge for women’s rights and pushing for the right to drive in Saudi Arabia. Loujain was kidnapped from the UAE in March 2018 and deported to Saudi Arabia where she was arrested for a few days, then put under a travel ban. She is currently still in Saudi prison, for over a year and a half now, even though the Kingdom has lifted the female driving ban leaving Loujain and many other women’s rights remaining jailed. There have been direct accounts from Loujain herself and her siblings that she has been tortured, sexually harassed, and threatened with rape and murder in jail by Saudi authorities. UBC and President Santa Ono have been vocal about the unfair conditions regarding Loujain’s arrest and her inability to reach the outside world.

Join us for this informative panel & campaign created by UBC alumna Dalya Al Masri that aims to discuss human rights, free speech in the middle east, and the unfairness of UBC alumna Loujain Al-Halthoul’s imprisonment, while pushing UBC to award her an honorary doctorate for her human rights activism.

Dalya Al Masri is a Palestinian-Canadian political analyst and UBC alumna. She has worked with Amnesty International and the United Nations Association in Canada on local and global human rights issues, and most recently as a journalist. Dalya’s motivation for this event was due to witnessing human rights violations first-hand in Saudi Arabia and the UAE, as well as hearing about the murder of Washington Post Saudi journalist, Jamal Khashoggi.

Sima Godfrey teaches French Literature and Cultural History in the Department of French, Hispanic and Italian Studies at UBC. She was the Founding Director of the UBC Institute for European Studies which she headed from 1998 – 2007. Loujain Al-Hathloul was her student in a course entitled “Qu’est-ce que la francité?” (“What is Frenchness?”).

Atiya Jaffar is a Digital Strategist with 350 Canada, an organization dedicated in tackling climate change, and organizer with Vancouver-based group Friends of Loujain. Atiya met Loujain during their time at UBC from 2011-2014 where they became fast friends.

Adel Iskandar is a British-born Middle East media scholar, postcolonial theorist, analyst, and academic. He is the author and co-author of several works on Arab media, most prominently an analysis of the Arab satellite station Al Jazeera. He is also a co-editor of Jadillya, an Ezine, with human rights lawyer Noura Erakat. Currently, he is an Assistant Professor of Global Communication at SFU.

Michelle Ghoussoub is a Lebanese-Canadian journalist with CBC News in Vancouver who has written on Loujain’s case. She has previously reported in Lebanon and Chile and graduated from the UBC School of Journalism in 2016.

Disclaimer: Please note that by using this service, your information will be stored on the Eventbrite server, which is located outside Canada. If you do not wish to use this service, please email joelle.lee@ubc.ca directly to register. Thank you. 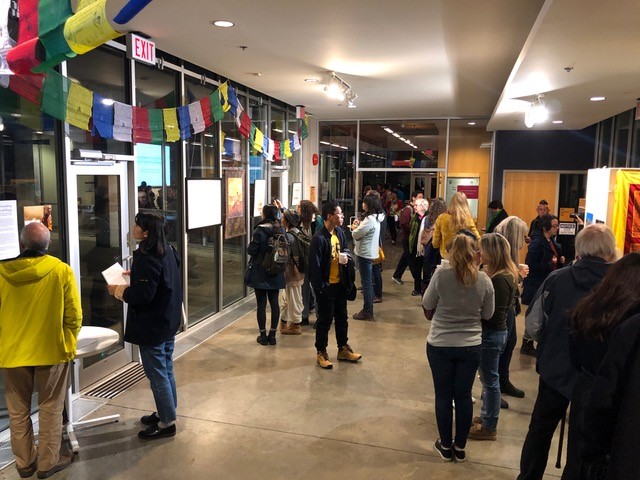 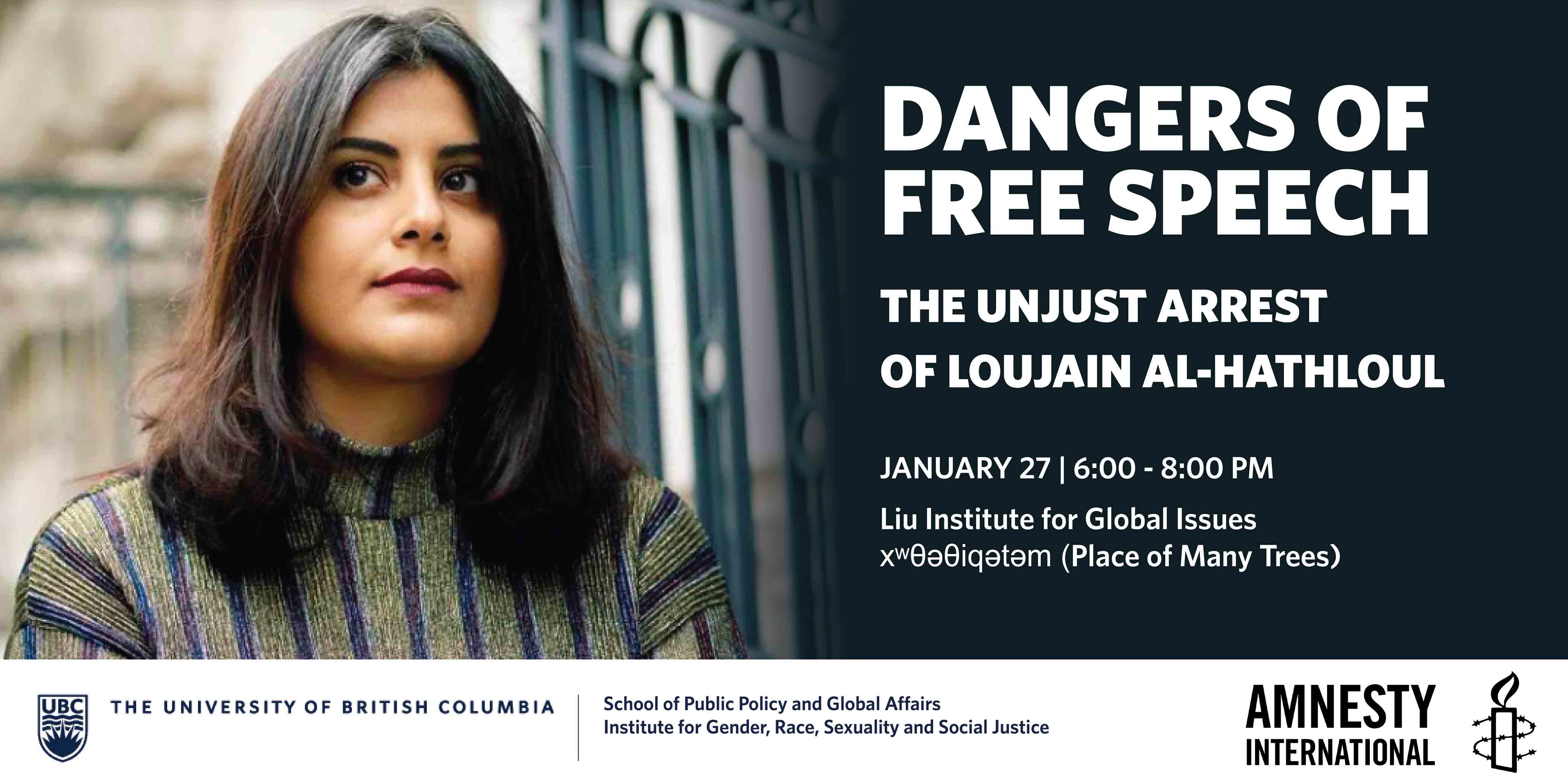 Hope vs Hopium – Is There a Role for Hope in the Climate Era? with Karen Mahon Carrington 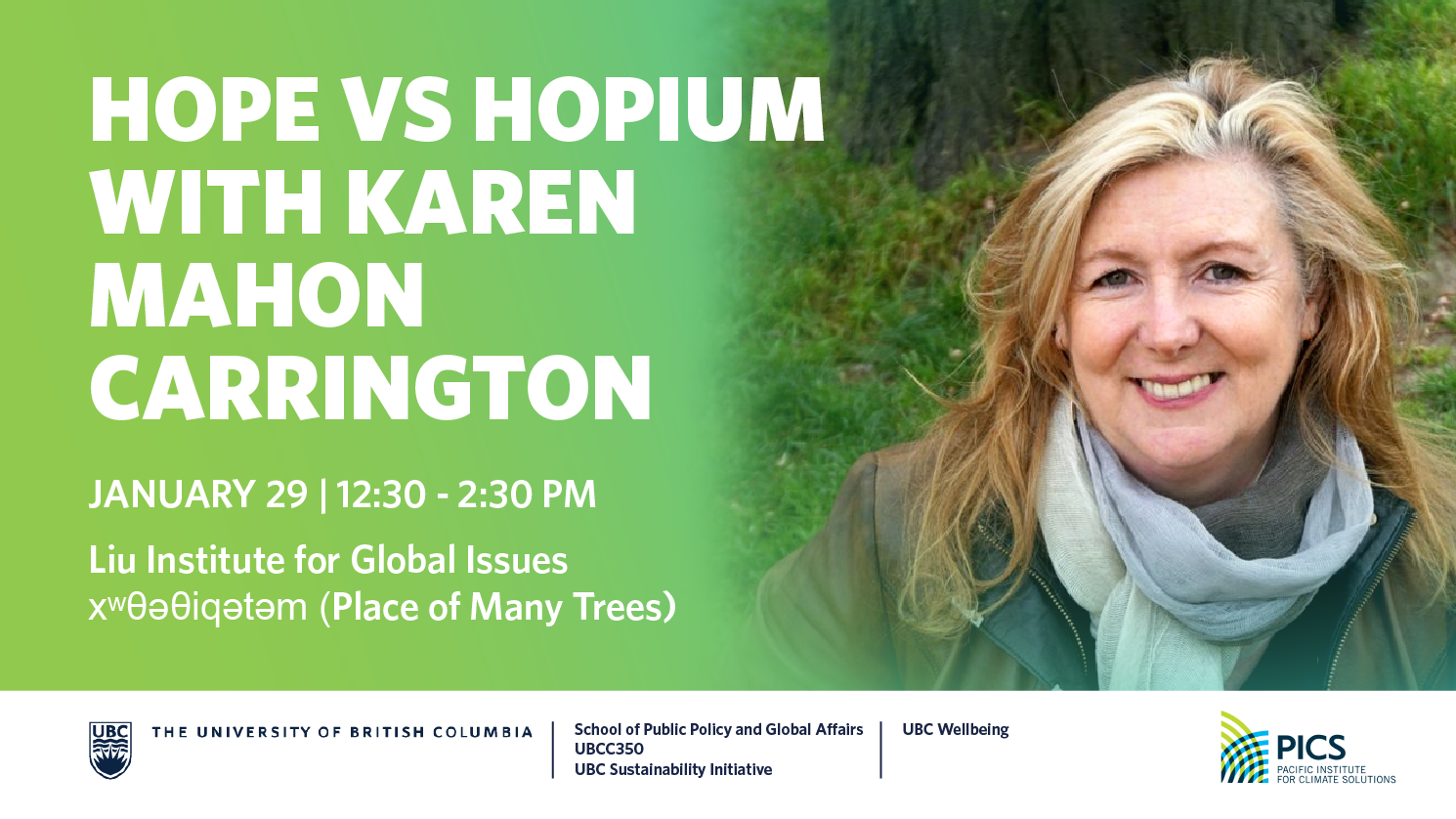