Virtual Book Launch: “One Who Dreams is Called Prophet” 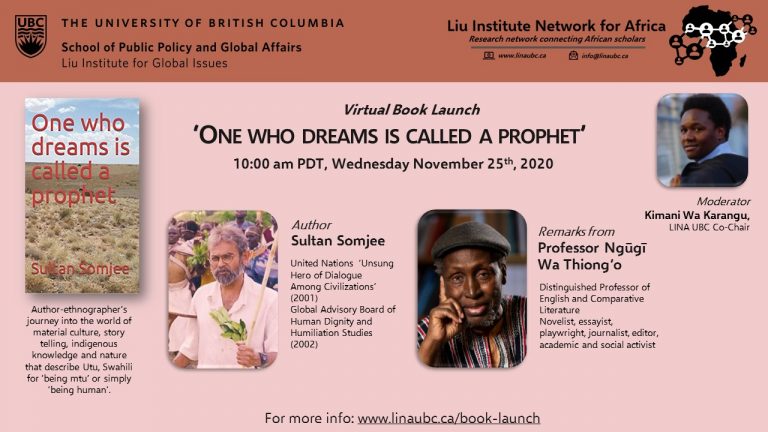 The Liu Institute Network for Africa (LINA) at the School of Public Policy and Global Affairs, University of British Columbia, is hosting the launch of the book, “One Who Dreams is Called Prophet,” authored by Dr. Sultan Somjee, with remarks from Prof. Ngũgĩ wa Thiong’o. The book is about peace making among indigenous peoples. LINA is a multidisciplinary policy, academic and community research network, with graduate student, postdoctoral, faculty, professional and community members.

The Zoom link to join will be provided upon registration.

Kimberly Baker, an artist, a writer, a museum educator, a peace activist, and a member of LINA, describes the book below:

“There is much to admire about Kenya’s Indigenous Peoples as peacemakers that are portrayed in One Who Dreams is Called a Prophet. In this creative fiction, Sultan Somjee intricately weaves together memoir, history, and peace heritage traditions by telling the story of one of the most sought-after ideals of humankind, the search for peace. Alama, the protagonist, walks across Kenya’s red soil meeting Elders, exchanging peace staffs, and with each encounter illuminating the stories of the beauty of peace. During his interactions with Western hegemony, he challenges liberal peace practices being employed and rejects money and fame, turning towards his own honour, dignity and freedom. Ultimately, finding internal peace within his own Indigenous belief system.” Kimberly Baker, UBC Ph.D Candidate (Thesis: Museums of Peace in Conflict Zones), and Chair, The Living Peace Museum, Canada 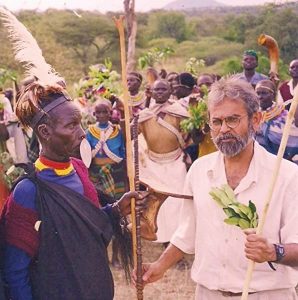 Sultan Somjee: For four decades Sultan Somjee has worked on material culture. He introduced learning about indigenous through material culture in the Kenyan school curriculum (1985-1990). While he was the Head of Ethnography at the National Museums of Kenya, Somjee started village peace museums. The museums highlight indigenous languages, material culture and the arts used over generations for reconciliation and social cohesion. Today, the peace museums have spread from Kenya to Uganda and South Sudan as a people to people civil society movement. In 2001, the United Nations named Somjee one among the only twelve ‘Unsung Heroes of Dialogue Among Civilizations’ worldwide in recognition of his work. In 2002, Somjee was appointed on the Global Advisory Board of Human Dignity and Humiliation Studies.

The book “One Who Dreams is Called a Prophet” is inspired by the author-ethnographer’s journey into the world of material culture, storytelling, indigenous African knowledge and nature that describe Utu, Swahili for ‘being mtu’ or simply ‘being human’. All over traditional Africa the principle of Utu or Ubantu is used in reconciliation and sustaining peace.

The year 1977 forced dramatic turns in Ngũgĩ’s life and career. Petals of Blood painted a harsh and unsparing picture of life in neo-colonial Kenya. That same year Ngũgĩ’s controversial play, Ngaahika Ndeenda (I Will Marry When I Want), written with Ngũgĩ wa Mirii, was performed at Kamirithu Educational and Cultural Center, Limuru, in an open-air theatre. Sharply critical of the inequalities and injustices of Kenyan society, Ngũgĩ was arrested and imprisoned without charge at Kamiti Maxium Security Prison. An account of those experiences can be found in his memoir, Detained: A Writer’s Prison Diary. After Amnesty International named him a Prisoner of Conscience, an international campaign secured his release a year later, December 1978. He resumed his writings and his activities in the theatre and in so doing, continued to be an uncomfortable voice for the Moi dictatorship. While in Britain for the launch and promotion of Devil on the Cross, he learned about the Moi regime’s plot to eliminate him on his return. This forced him into exile, first in Britain (1982 – 1989) and then the U. S. (1989 – 2002). He remained in exile for the duration of the Moi dictatorship. When he and his wife, Njeeri returned to Kenya in 2004 after twenty-two years in exile, they were attacked by four hired gunmen and narrowly escaped with their lives.

His most recent publications are Wizard of the Crow ‘06, Something Torn and New: An African Renaissance ’09, Dreams in a Time of War: A Childhood Memoir ’10, Globalectics: Theory and The Politics of Knowing ’12, In the House of the Intrepreter ’12, In the Name of the Mother ’13, and Secure the Base 2016. Most recent works include his third memoir, Birth of a Dreamweaver: A Writer’s Awakening 2016; Wrestling with the Devil: A Prison Memoir. New York: New Press, 2018; Kenda Mũiyũrũ: Rũgano Rwa Gĩkũyũ Na Mũmbi. East African Educational Publishers Limited, 2018 (Gĩkũyũ); Minutes of Glory: And Other Stories. New York: New Press, 2019; The Perfect Nine: The Epic of Gikuyu and Mumbi, New York: The New Press, 2020. 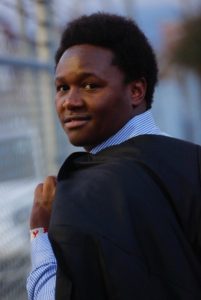 Kimani Wa Karangu: Kimani was born and raised in Kenya. He is currently working on his PhD in Curriculum Studies at UBC, where he also completed his MA. His Bachelor of Education is from Kenyatta University with a focus on history and Kiswahili. His primary research interest is improving education in Africa, especially in refugee camps such as Dadaab and Kakuma.

Kimani is a Co-Chair of LINA, the President of the Graduate Student Society of UBC, President of the Kenyan Community in British Columbia, and radio co-host of the African Vibes Show at the Community Radio, Vancouver, CFRO 100.5FM. He is a former Peer Advisor at the Faculty of Education Curriculum and Pedagogy Department at UBC. 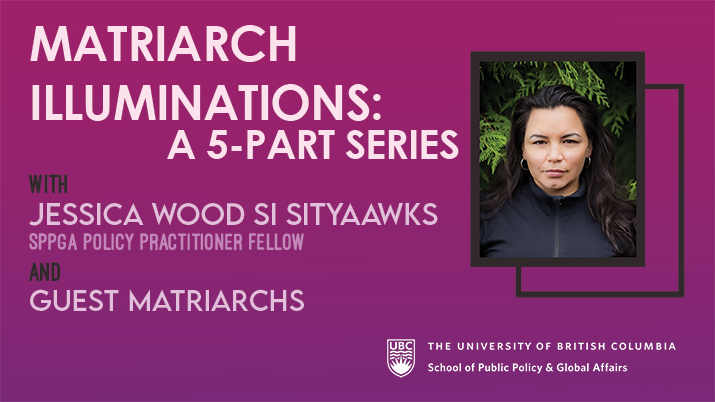 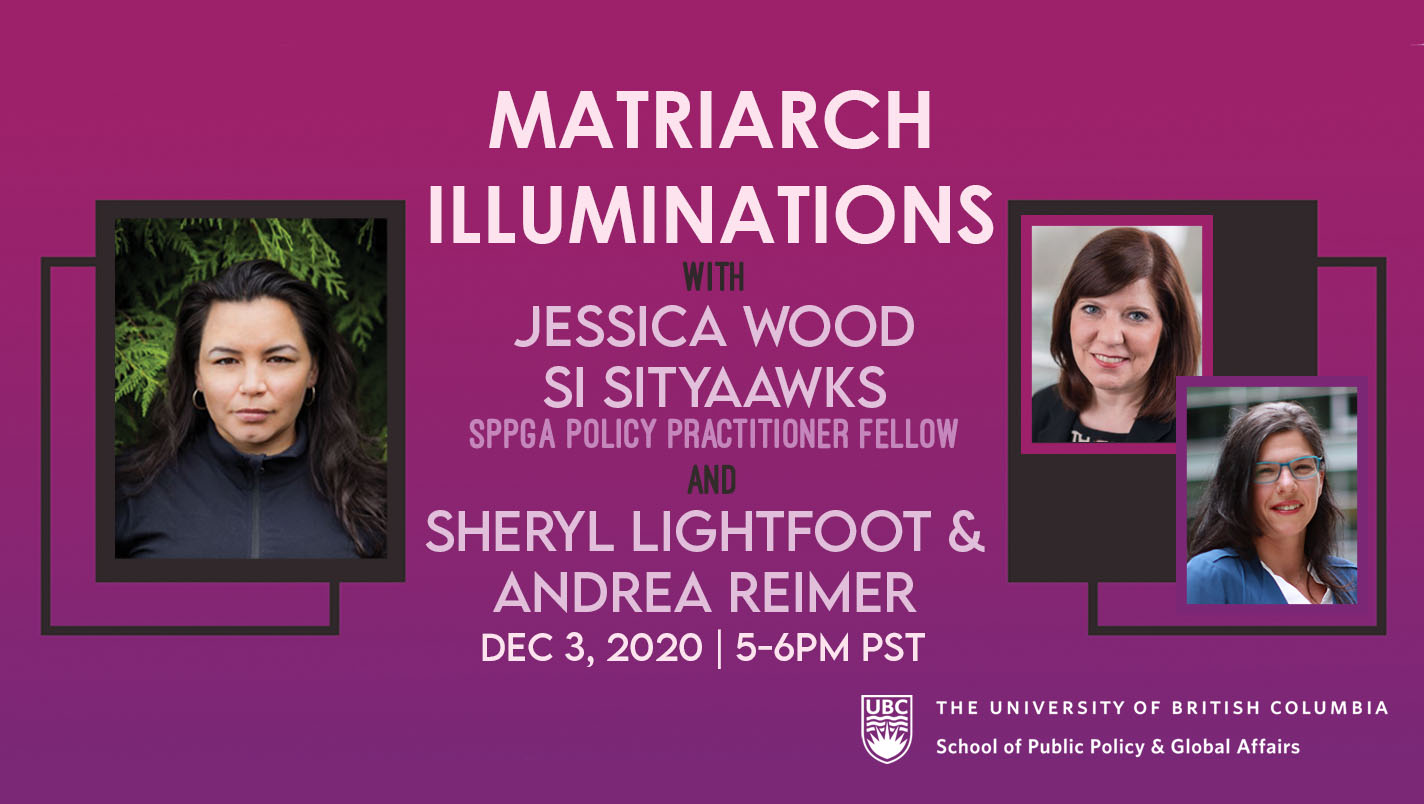 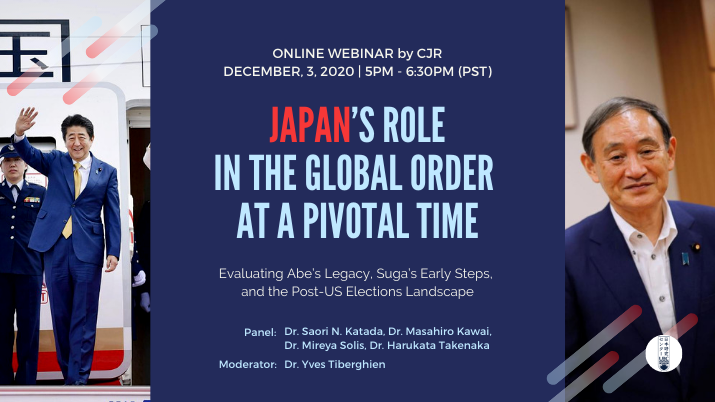