The 2020 U.S. Election Event Series: Doubling Down on Democracy 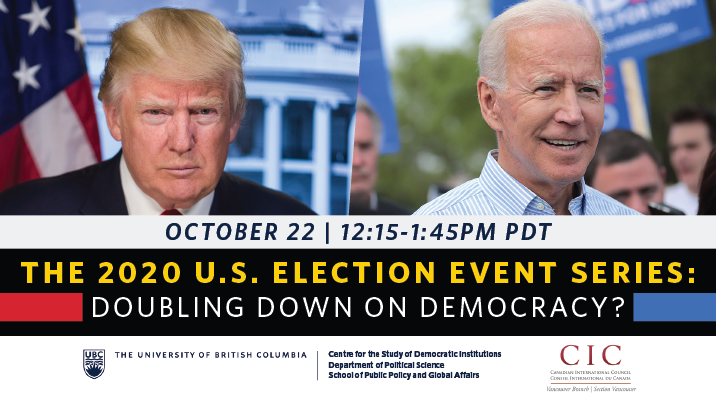 This event is a part of “The 2020 U.S. Election Event series“. Please stay tuned for future events.

In the midst of a global pandemic, tens of millions of Americans have already begun voting in record numbers. This panel will first provide an overview of the nuts and bolts of the campaigns, the overall context of this election, its dynamics and even a little something of a forecast. Panelists will also discuss the impact protests against racialized violence and police brutality have had in shaping public opinion and the impact of voter suppression and intimidation. Finally, the panel will consider the possibilities of an unclear or contested outcome and possible scenarios for the immediate aftermath of the election.

Bruce Baum is an Associate Professor of Political Science at UBC. He works in modern and contemporary political theory. His primary research and teaching interests are in the areas of critical social theory, including critical race and feminist theory; American political thought and cultural politics; the political theories of Mill and Marx; and philosophy of political inquiry; and liberal and democratic theory. His current project is tentatively titled “Identities and Indignities: Critical Theory and the Politics of Equality, Identity, and Difference.”

Richard Johnston is a Professor Emeritus of Political Science at UBC. Dr. Johnston’s distinguished career includes appointments at the University of Toronto, UPenn, Caltech, and Harvard in addition to his long service to UBC. He held the Canada Research Chair in Public Opinion, Elections, and Representation until his retirement in June, 2020. Dr. Johnston has done extensive research in electoral and party systems, communications media and campaigns, and social capital, diversity and the welfare state.

Robert Russo is a Faculty Lead Lecturer for the LLMCL program at the Peter A. Allard School of Law. Dr. Russo’s interests in law include human rights, labour and justice issues. His research has been primarily in the area of immigration and labour/employment law and he has published several peer-reviewed articles in this field. He is an active member in the local legal community and a member of the Law Society of British Columbia.